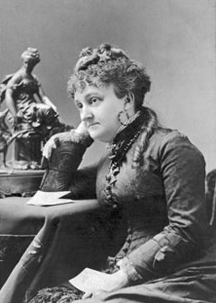 Myra Bradwell:  The United States Supreme Court told her it was rational to bar her from being an attorney because of the presumed female frailty, so instead she made laws, changed laws, and became the voice of the profession that spurned her.  So much for fainting on the courthouse steps.

Myra Bradwell is a name that few people have heard, unless those people have been to law school (granted, do lawyers really count as people anyway?).  For us few soulless corporate monsters or idealistic pauper do-gooders that suffered through a semester of constitutional law, Myra Bradwell is the woman who was denied the right to practice law in Illinois, because “[t]he natural and proper timidity and delicacy which belongs to the female sex evidently unfits it for many of the occupations of civil life.”  That’s an actual quote from the concurring opinion of the Supreme Court of the United States ladies and gents.  Just FYI.

That name and that quote often follow me into the office or the courtroom or wherever I’m called upon to be a zealous but dispassioned advocate for whomever is paying my bills.  She was denied a right that I now have by the United States Supreme Court, which agreed with the Illinois Supreme Court, in 1873. And that is why I know the name Myra Bradwell. That is why I decided to write this blogpost about Myra Bradwell.  But that should not be the legacy of Myra Colby Bradwell.

Myra Bradwell was born February 12, 1831 in Manchester, Vermont.  She married James B. Bradwell, and in 1855 he became a lawyer.  She worked in his law offices.  And, like so many to come before and after her, she thought “hmm, I could do that.”  So she sat for and passed the Illinois Bar Exam (trust me, it’s so much more than a test), and applied to be admitted to the Illinois Bar.  They said no. So she sued and took it all the way to the Illinois Supreme Court. They said no. And so she appealed that to the United State Supreme Court.  And you guessed it, they said no (actually they said Illinois had the right to make its own laws and women weren’t guaranteed the right to be an attorney by the 14th Amendment — legal semantics most of you won’t care about).  I’m sure the court case was salacious. I’m sure an entire country was up in arms as pro or against. But did Ms. Bradwell sit on her tuffet and wait to see if she’d be granted the right to perform a job she was perfectly qualified for?  No.

In 1868, Myra Bradwell founded the Chicago Legal News.  It was the first legal newspaper edited by a woman. It soon became the most important legal publication in the American west.  She continued its publication even after the offices were destroyed in the Great Chicago Fire of 1871. The publication was so important that legislation was passed allowing courts to take judicial notice of it (which in non-legalese means essentially that courts could take it as evidence without requiring proof that it was accurate).  So a legal journal edited by a person denied the right to practice law changed the landscape of the profession that spurned her. So much for fainting on the courthouse steps.

But that’s not all.  Myra Bradwell helped organize Chicago’s first suffragette convention in 1869, and helped found the American Suffrage Association (her husband helped).  She helped draft and pass a bill giving married women the right to retain their wages. She even represented Illinois at the Centennial Exposition in Philadelphia (which was the first World’s Fair), and helped Illinois win.

And, in a truly strange turn of historical events, Myra Bradwell assisted Mary Todd Lincoln (yes, that Mrs. Lincoln) in freeing herself from a mental institution after her son had her committed without due process following the assassination of this nation’s 16th president.

Eventually in 1890 Myra Bradwell was admitted to the Illinois bar on their own motion (i.e. she didn’t reapply, Illinois decided she should be admitted), and was given the right to practice before the U.S. Supreme Court months before her death on Valentine’s Day 1894.  But she didn’t wait around for the door to open to follow her passion. She snuck in windows and down chimneys, effectuating change all around her and impacting the legal profession more than most admitted attorneys.

So now, when I’m sitting in a courtroom full of attorneys, all of whom are white males (honestly, still not that uncommon of an occurrence), I’m not thinking about the court case Ms. Bradwell lost.  I’m thinking about what she did with the rights she had.